Hinterstoder is such an idyllic place, not just because I hail from there, but because everyone I have ever recommended going there, comes back enchanted.  The distant past history is not available to us, lost because of the isolation, the rugged terrain, and the lack of written language.  The ancient geologic history leaves clues so we know quite a bit about it.

Simply put, Africa crashed into Europe in some places parts of Africa broke off and became part of Europe, like the top of the Matterhorn is a piece of Africa. Hinterstoder mountains were raised up by the African plate that went under the European plate and that elevated granite mountains up like the Grosse Priel, the Kleine Priel, and the Spitzmaur in the northwest, the Grosse Hochkasten andthe Kleine Hochkasten in the west, and the terminal branches of the Warscheneck in the south, all surrounding the valley through which the Steyr River flows. 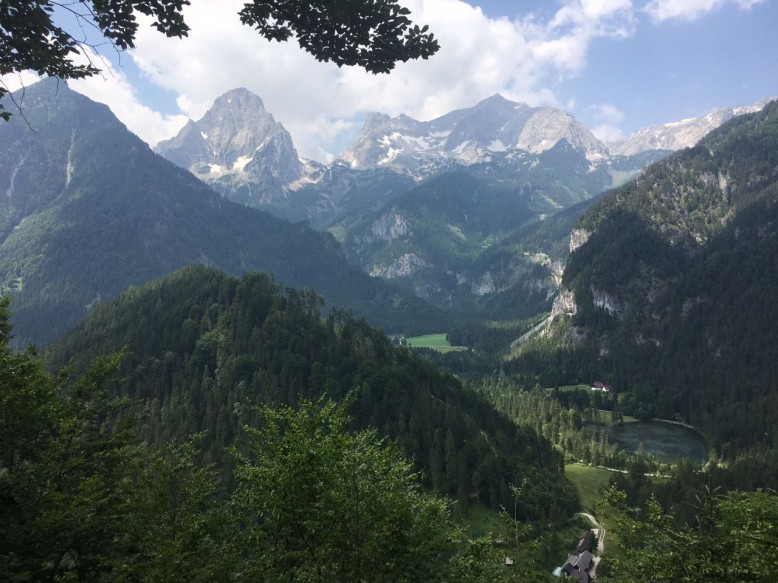 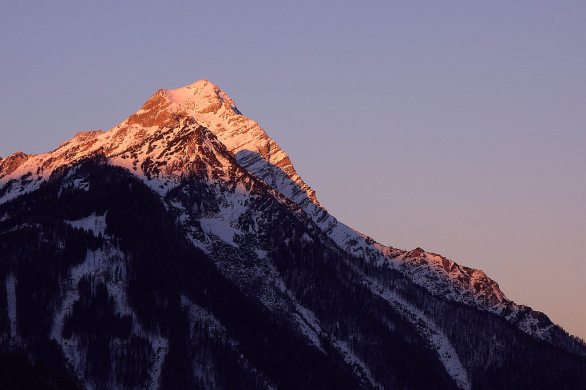 The Kleiner Priel with the light of “Alpenglühen”, a rose-colored appearance on the tips of mountains with the last rays of the setting sun that makes the mountain top look like it is glowing. 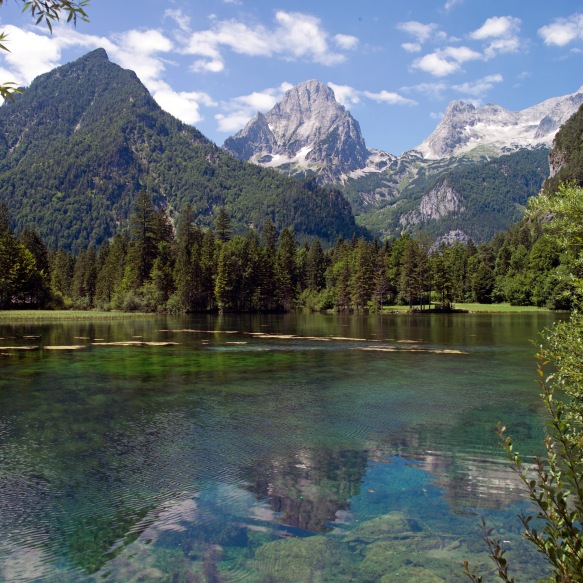 The mountains tower over and surround the lush valley below.  Two glaciations are responsible for cutting the east west trough which created the valley.  The first one about 300,000 years ago left the old valley floor.  The remnants of which are seen 300 meters  above the current floor on the north and south sides of the valley . They are represented by a second tier of meadows.  The current floor was cut by a second glaciation, about 100,000 years ago, and is the path of the Steyr River.  It starts from the back of the valley at the Steyrurspung, then flows out of the valley over a shear fault in the rock which creates the waterfall, Strumboding. 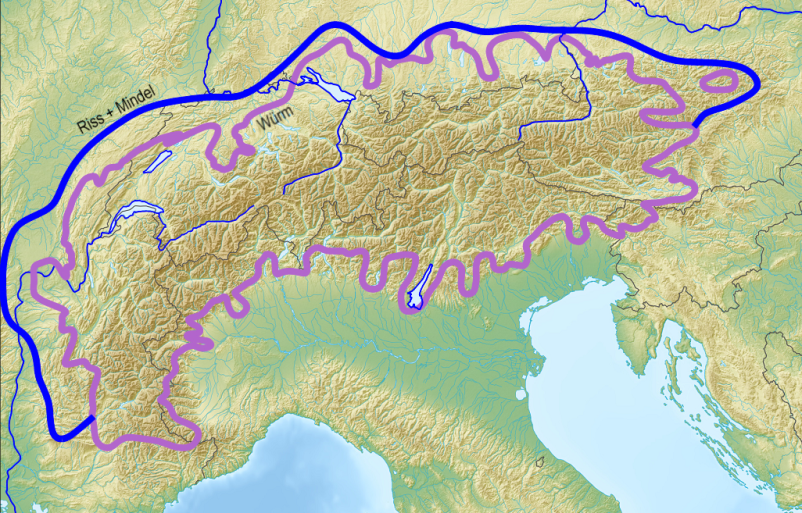 The two most recent glaciations of the Alps. The Würm lasted until just 11,000 years ago.  As that glacier melted a see (the Gosaumeer) was created.  As the waters warmed it teemed with a variety of aquatic life.  At the back of the valley where now the Steyr River comes out from under the foot of the Hochkasten massive, there is the evidence for that ancient lake, the so called Muschelsteine, seashell stones. 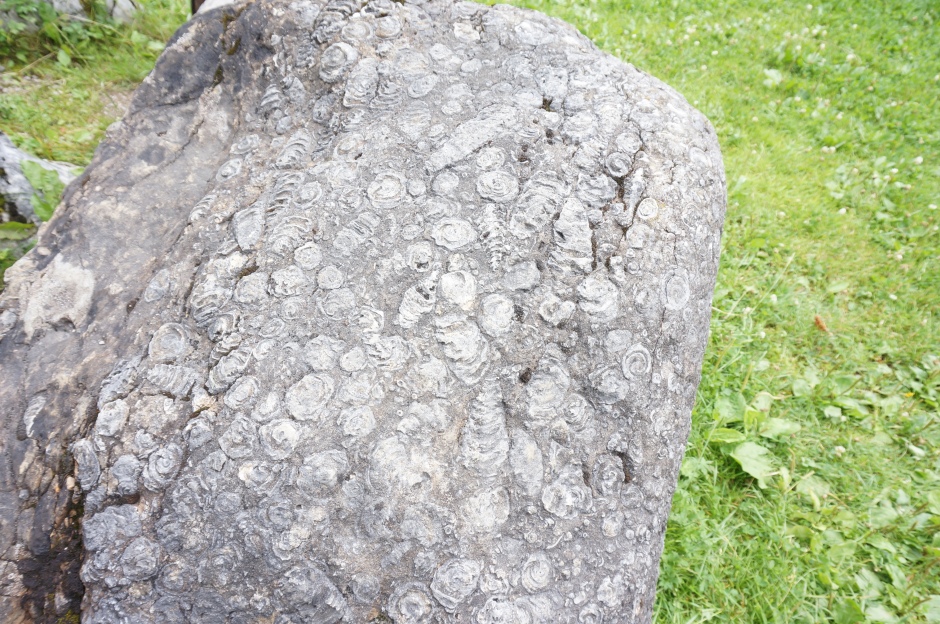 Hinterstoderer’s collect these rocks and use them in a variety of ways as a decoration.  On this rock you can see a sharp line below which there are no shells.  Clearly the water was not friendly to life below that line, maybe too cold, or too mineral rich, or a dozen other reasons.  It is getting harder and harder to find these stones as people cart them away and put them around flower beds and even use them as grave markers.  Showing my Hinterstoder genes, I too carried one back to the US in my luggage.  It was difficult to explain to the TSA as to why I was carrying rocks in my luggage, not to mention getting by the new weight restrictions on airplanes. 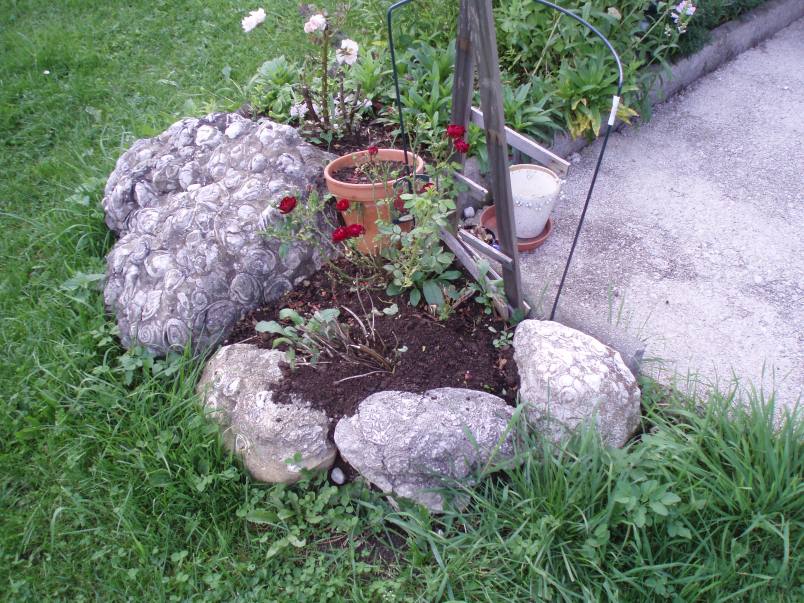 ♦The cultural history is even more mysterious, as the valley was not easily accessible in the early centuries.  There was a Celtic settlement near Hinterstoder, about 20 miles south-west as the crow flies, but separated by mountains, nevertheless human ingenuity and curiosity being what it is, this culture spread quite a distance throughout Europe.  This was the Hallstatt Culture.   As early as 800 BC these Celts wandered around the Stodertal.  That too has tangible proof.  In 1903 a tourist who was wandering from the Warscheneck to Hutererhöss found a Bronze dagger obviously from the Bronze age.

The Hallstatt Culture developed because of the discovery of salt there, and the Celts mined it and traded it.  Hall is an old Celtic word for salt.

This is what one of them may have looked like.

They lived in block houses and had a belief in the afterlife, evidenced by the way they buried their dead, often providing food and possessions for the trip into the netherworld.  They had shoes, and warm clothing to protect them from the elements, as the last ice age still had remnants of glaciers especially at higher elevations like the Alps. 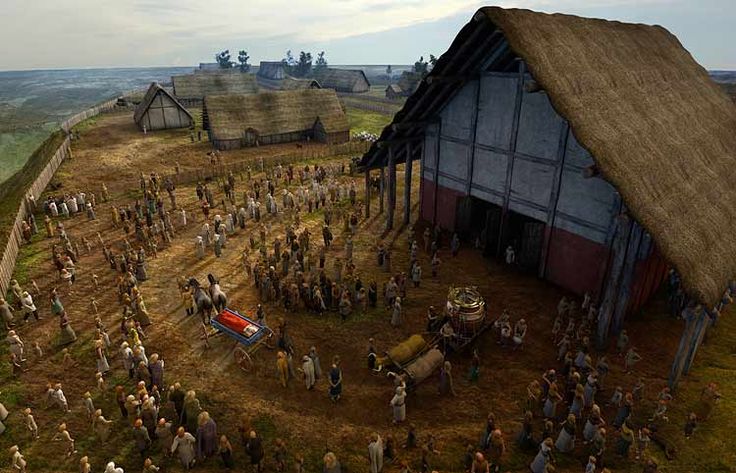 Hallstatt settlement with a funeral procession in progress

By the Roman Era, the Celts had differentiated into many tribes: the Helvetii, the Gauls , the Belgae, and the Eastern Celts that eventually became the Slovenians.  They saw an opportunity to find warmer climates in the south.  The Romans felt threatened by these migrations.  In 58 BC Caesar started his Gallic Campagnas to contain this threat. By 50 BC he had done so and claimed, “Veni, Vidi, Vici” (I came, I saw, and I conquered). Rome had military stations all over what Caesar called Galia, the closest to Hinterstoder was about 10 miles north east in what they called Gabromagus (now Windischgarsten).

In 475 CE Odoacer, a Hun, became King and marked the fall of Rome.  He was the first “Barbarian” King, something that Caesar foresaw and feared nearly 500 years before. The Middle Ages ushered in the influence of the Pope into the politics of the old Celtic tribes with the creation of the Holy Roman Empire which was in fact not holy, not Roman, nor an empire.  There was however much strife and internal conflict.  In 777 Tassilo, who was a vassal of Pipin the Short, the first Carolingian King and father of Charlemagne, was banished to the Convent in Kremsmünster near Hinterstoder, for transgressions against the Pope. Tassilo founded and administered the monastary as its Prelate, the highest-ranking clergyman.  It is known that the entire region, including the mountains, was subsequently a gift from the Holy Roman Emperor, Henry II, to the Bishopric of Bamberg in 1007.  “Stoder” is a Slavic name meaning cold or stony ground.  It appears as a footnote in a document from the Monastery Kremsmünster which assigns the ownership of the Stoder Valley to the Domain of the Convent Spital am Pyhrn where it remained for hundreds of years.  The terrain was inhabited by non-Germans, the Slovenians who migrated south and occupied the lands between the Traun River and the Enns River.  The Steyr is a tributary of the Enns and it would be likely that migrating tribes would follow the rivers in their search for habitable lands. Following the Steyr would lead them into the valley that now is the Stodertal.

In the 1700’s the Prelate of the Convent Spital am Pyhrn decided that Innerstoder (as Hinterstoder was called then) should have its own independent church. 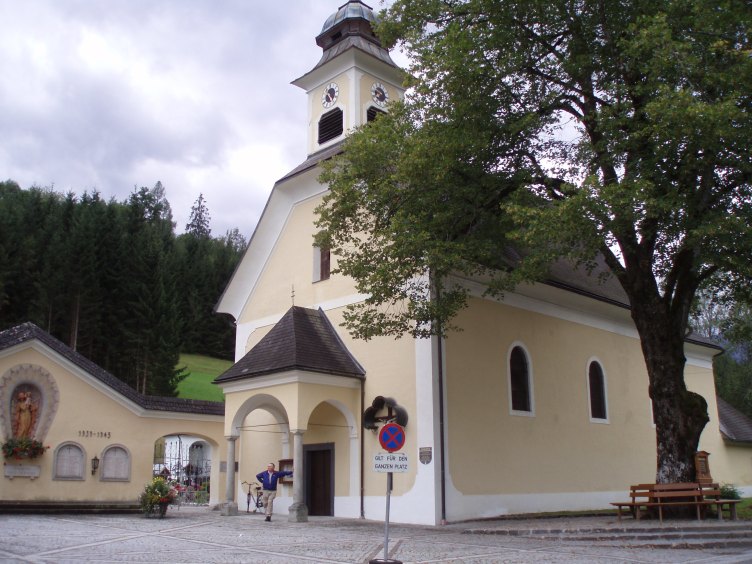 On September 14, 1787 after a two-year building effort in the Baroque style the “Innerstoder” church was christened by the Prelate, his eminence Josef Grundtner of the Convent Spital am Pyhrn.  The high altar as well as other church accoutrements were a donation from the Convent that dated back to 1740.

It was one year later, 1788, that school instructions were instituted by a tailer who had no formal education as a teacher, Johann Langeder. As his teacher’s income was insufficient, he supplemented it with repairing watches.

It was not until the middle 1800’s that “Innerstoder” became its own independent community, completely free from the Convent’s governance.  In 1805 Napoleon attacked Austria.  His armies found Hinterstoder, and they were not all that friendly to Austrians.  It was the action of the priest, Franz Xaver Gesser, that saved Hinterstoder from much grief and damage from the French army.  He spoke fluent French and was an able and intelligent negotiator.

With the assassination of the Crown Prince, Francis Ferdinand, and his wife on July 28, 1914, World War I was started. It took its toll on Hinterstoder. 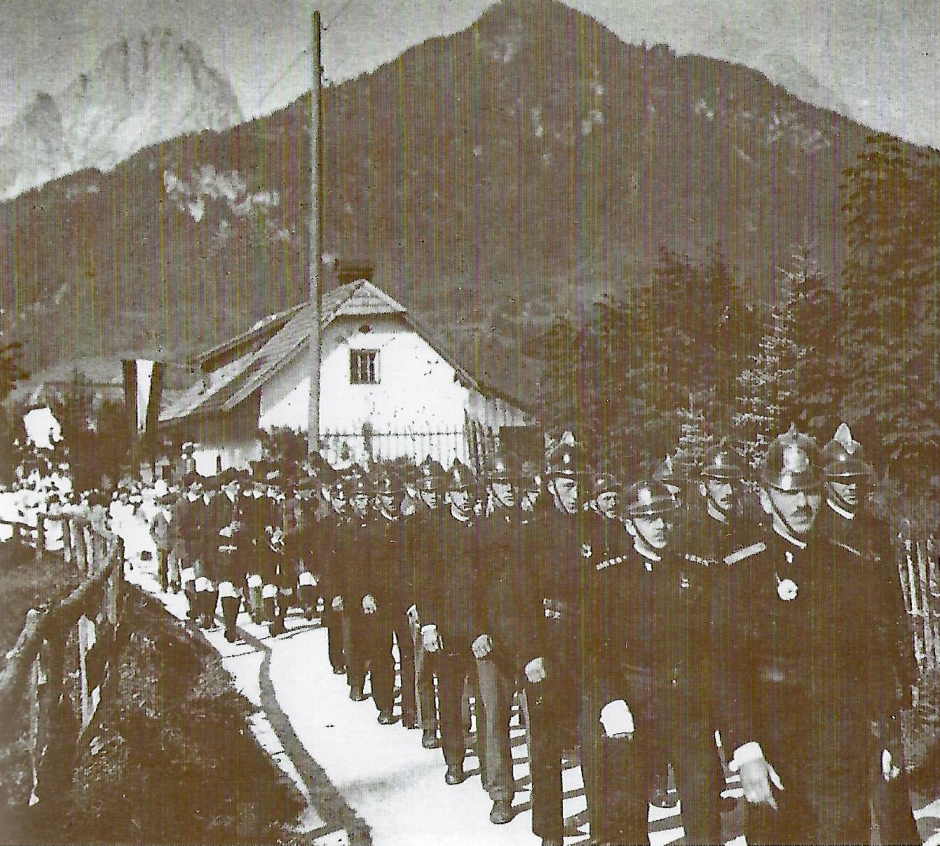 On the 1st of August fourty Stoder boys assembled in the courtyard beween the school and church and were mobilized into the Austro-Hungarian fighting force. The first death notice from Stoder belongs to Johan Prieler.  The list would swell to 60.

Then after World War II another 85 were added on to the war memorial in that same courtyard where the first volunteers assembled.