It is perhaps the wrong time to write an essay about global warming in the middle of a heatwave and drought.  The technical definition of a desert is 10 inches or less rainfall per year. We have hit that marker 60% of the time in the last 70 years in the Los Angeles Basin. In the distant past, droughts have lasted decades and even several hundreds of years. When you live in a desert or a near-desert, what do you expect? This is not a drought and not a heatwave. This is NORMAL for us!

There is little debate about the issue that the earth is getting warmer.  The “deniers” don’t argue that point.  They do, however, question the mechanisms of global warming and what we could, should, or should not do about it.  In the words of Al Gore, “The science is settled!”  If you really care, you need to read a book written by Steven E. Koonin, Unsettled ?.  He served as Undersecretary for Science, US Department of Energy under the Obama Administration. As a scientist and as a policymaker, he is in a good position to tell us the real deal. The book is full of graphs and charts that dispute the “settled” charge.  I admit it is not an easy read with much to digest. As to why the science is not settled takes Dr. Koonin 283 pages to explain and would be impossible to recount in this essay. But this is an issue that is a lot more complex than we were led to believe. Take my word for it or read the book, Unsettled?. The science is definitely not settled to a level where we have sufficient information to make irrevocable life-altering decisions that will transform not just energy but economics, construction, transportation, and agriculture. It will also require massive new taxes, retooling the labor market with deleting large swaths of the workforce and retraining millions for as yet undefined jobs. The point of all this is to lower human-generated atmospheric (anthropogenic)  CO2. Something that has not yet met the ultimate test. Does lowering anthropogenic atmospheric CO2 really lower the global temperature? That double-blind controlled test has not yet been done! The real fanatics don’t even consider climate the main goal. The primary push is to change the way we live, reverse the industrial revolution, gain control of how we work, play, travel, become educated, earn a living, and are governed. It is about globalization and control. Once WE have gained control changing the climate will be a snap. Never let a crisis go to waste! They say.

Half the world population believes that global warming will cause the extinction of humankind, and soon. Many of the media-driven alarms are, in fact, not true. Extreme weather is the same now as it was 100 years ago. The recent media loves to report the record highest temperature and the hottest summer, but when fact-checked, is not the highest or hottest. The recorded hottest temperature was in 1913 in the Mojave desert when it reached 134̊ F, when CO2 was 301 ppm. The hottest summer happened in the 1930s, coinciding with the dust bowls, when atmospheric CO2 levels were 310 ppm, 100 ppm lower than now. This poses the question, if atmospheric CO2 is the driver of global warming, how will lowering its level reduce those record high temperatures? All the accords,  so far, the Kyoto Protocol, the Copenhagen Accord,  the Durban Platform, and most recently the Paris Agreement have been jokes. No one has come anywhere close to cutting greenhouse gas emissions at the agreed-upon levels.

Fires have always existed and are no worse now than in the past, if in fact not better if you look at the numbers. In the 1920s, the US lost 40 – 50 million acres a year to fire.  In the last six decades, we have lost less than 10 million acres a year, 75% less because of better forestry management and better fire fighting equipment and techniques.

Climate change has many names that give it an urgency: climate crisis,  climate breakdown, climate catastrophe, climate emergency, global heating, and environmental destruction. This is media hype and not a fact if you study the actual numbers.

Droughts are cyclic. In one place on earth, they may be worse, but in others, there are fewer droughts. Looking at it globally, it is about the same. Cyclones, hurricanes, and tropical storms are not worse. They do cost more because there is more infrastructure for them to destroy now than there was in the past, but that is not a legitimate measure of worsening winds. In 1960 there were just 3 billion inhabitants on the earth.  Now we are almost 8 billion we have have built a lot more houses, skyscrapers, ice skating rinks, universities, and McDonalds. 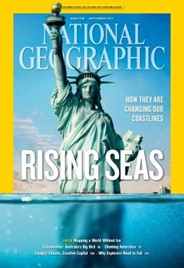 Sea levels have not changed nearly as much as Al Gore’s book, An Inconvenient Truth predicted, a 20 foot rise by now. At the beginning of industrialization in 1900, the rate of change in sea level was 1mm per year.  It rose to 3mm per year in 1940; then dipped back below 1mm per year in the 1950s and 1960s. It is back to 3mm per year now. Even if sea levels rose at ten times that level yearly, it would take 2,000 years to reach the level depicted by National Geographic, a bit of hysterical literary license that looks more like fear-mongering.

The arctic and antarctic ice cover tend to be opposite in receding and growing.  Currently, the south pole has had an overall positive trend in the last 40 years, while the north pole is losing ice. It was that way during the medieval warming about a thousand years ago when Greenland was actually green. Eric the Red (named for his red beard) established a settlement on the ice-free southwest coast of the island, and at least 5000 Vikings flourished there for about 400 years when the “Little Ice Age,” starting in 1300 and ending in 1850, drove them out.

The Green New Deal sets us on a path of spending trillions of dollars and will require us to change our life and lifestyle to accommodate the necessary alterations that are supposedly needed to bring down the CO2 levels that are said to be the main culprit causing global warming. Before embarking on this life-altering path, we need to know as much as possible about the what’s and wherefore’s of the science. Not only are the basics not settled, such as what really is going on, and what can we do about it, but also, is all doomed in 12 years or less, or is there much more time? What options do we have?   Are there other answers we need to research?  It reminds me of the joke of the guy who fell off the 1000 foot cliff but manages to catch a branch of a bush to which he is hanging on for dear life.  He calls for help from anyone up there to help him. Finally, he invokes the Almighty to save him. The clouds part, and a booming voice says, “You must have faith!”  “I do!” the hapless man screams.  “Then you must let go of the branch.” After a long pause, the man yells, “Is there anybody else up there?”