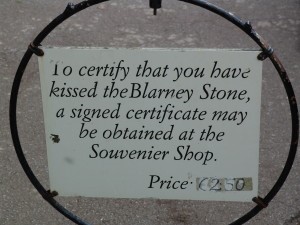 It is said that if you kiss the Blarney Stone the “gift of gab” is somehow bestowed upon you. I told my wife, Mary, not to do it. She kissed it anyway and instead of getting “running off” at the mouth, she got “running off” from the other end the next day. Imagine over 600 years’ worth of lips touching that stone…six centuries of spittle accumulating all those germs over all those years.

It might be  even more dismal than that.  Rumors  have it that some of the locals urinate on the stone at night.  Although having been there, I find it hard to believe this particular story since the location of the stone would make that act an almost impossible feat by anyone other than a very talented contortionist, not to mention having to have a very powerful stream of urine to reach the stone.  Kissing being a sort of sexual activity, you might say that kissing the Blarney Stone could give you an STD.

Blarney Castle dates all the way back to the fourteenth century. Cormac Teige McCarthy, the lord of the castle, helped Robert the Bruce of Scotland, in a major battle against the English, and as a reward he was given a stone said to possess magical powers. It was used in the crowning ritual of the Scottish kings, and supposedly was first brought to Scotland from the Holy Land after one of the crusades. It was incorporated into the castle wall at its highest point. In order to get your lips to touch it, you must lie flat on your back, dangerously leaning backwards over a ledge that drops several hundred feet to the ground. If some strong person doesn’t hang on to you, it would be easy to slip through the gap in the wall, and hurl down the abyss to your death.

Queen Elizabeth I wanted McCarthy to guarantee his allegiances and hold that land in trust for her. Somehow, McCarthy managed to make promises to the Queen without ever giving the Queen what she really wanted. This became a game, and eventually the Queen uttered the famous line when once again McCarthy delivered artful language, without the coveted assurances. The Queen said, “That’s a lot of Blarney!” Blarney has become a metaphor for deceitful, clever words that dance around the issue, never revealing the truth.

Humans have a need, and often an ulterior motive to spin words in order to deceive, mislead, placate or convince. Some amongst us are better at it than others. Cicero, the great Roman orator, was also one of Rome’s most sought after lawyers, precisely because he was such a “word smith.” He could convince anyone of anything! At one point in his career, pleading a case before a jury for a woman, who was suing for divorce from her wealthy aristocratic Roman husband, Cicero went out into the streets of Rome, and found half a dozen street children, starved, dirty, forlorn, and dressed in rags, to sit with this woman every day during the trial. He never lied that these were her children, but it was clearly implied that these children, and the “mother” were abandoned by the wealthy “aristocad.” The jury awarded her a huge settlement.

More recently there was the O. J. Simpson case. Johnny Cochran uttered the famous lines: “If it doesn’t fit, you must acquit!” In my profession, as a surgeon, I wear two sets of rubber gloves during surgery. I do this because of the fear of getting the patient’s blood on my hands. I, like everyone else, always have some minor injury, a scratch or cut, or some minor break in the skin. With all the potential diseases that could be transmitted through blood, two gloves seem better than one, whether true or not, I do it. It takes quite a bit of skill and practice, help from the nurses, and starch powder, to put on two pairs of gloves that are my size. Yet when O.J., wearing rubber gloves, awkwardly tried on the blood soaked leather gloves found at the murder scene, that had been sitting in a police evidence locker, drying and shrinking for months, they appeared not to fit. That was the key to the whole trial. They didn’t fit! You must acquit! As Vaclav Havel, first Lithuanian post-Communist president and Poet Laureate said, “Words can prove mightier than ten military divisions.”

Blarney has become the stuff dealt out by almost all politicians who tell us what they think we want to hear, and by people in position of authority who tell us what we ought to think, and what we ought to do. Indeed, they succeed in passing such Blarney off as truth, fooling a lot of the people much of the time. Those Blarney dealers are the same folks who run our government, our news services, bureaucracies in our hospitals, financial institutions, and businesses.  So there is something to be said for Blarney – it works! That is why the country is going bust. That is why the economy is faltering. That is why taxes are what they are, and the Blarney they hand out is that we need to pay more, and more, to keep us from falling off the cliff. That is why bureaucratic complexity is strangling our very existence.

There is one defense for Blarney. For one thing, don’t ever kiss the Blarney stone, for another take everything you hear with a grain of salt. This is so aptly addressed in the Qur’an (Sura 17:36). Allah says, “ Do not accept any information, unless you verify it yourself. I have given you the hearing, the eyesight, and the brain, and you are responsible for using them.” Very good advice!