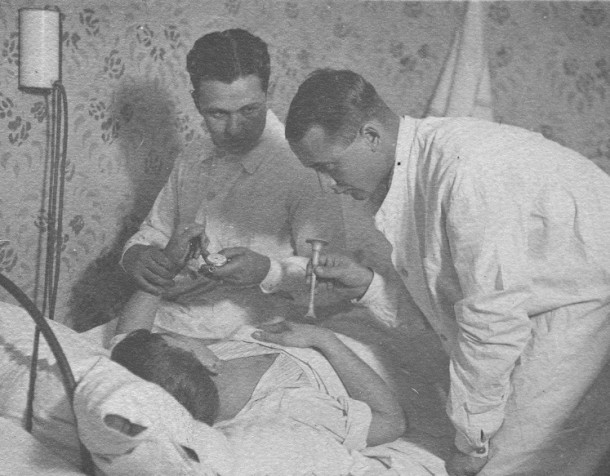 The photograph above is almost a century old.  It depicts my father and his best friend in medical school examining a patient.  In my father’s right hand is a stethoscope, not like any stethoscope you might recognize.  This is what it looked like when it was first invented by René Laennec, the same Laennec who gave the alcoholic liver disease its name of cirrhosis, from the Greek word for “tawny” -the yellow color the liver turns when pickled by too many short chain carbon fragments.  He also named the deadly skin cancer melanoma.  His invention looked the same in 1926 (the one above) since he invented it in 1816.  He is said to have come upon the idea watching children play with a long wooden stick that they placed against their ear while a friend scratched the other end with a stick.  Sound was transmitted and amplified.  He played the flute and thus that shape is what he used to make the first stethoscope.  An additional incentive for him was modesty.  It was not seemly for a male to place his ear on the chest of a bare-chested lady, even if the intent was to listen to the heart. He wrote the classic treatise De l’Auscultation Mediate  (About “indirect auscultation”— what he called using the stethoscope).  He was the first to coin the terms, rales, rhonchi, and crepitance.   Ironically Laennec was diagnosed as having TB, by his nephew, using the stethoscope Laennec had invented.  He died of that disease 10 years after his invention.

You might be more familiar with the modern version of the stethoscope depicted below, which you have seen used by you doctor. 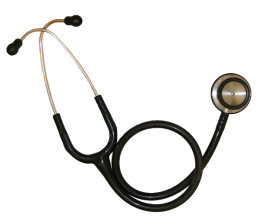 Additionally, to being a superior instrument to listen to the heart and lungs, it has become a symbol of the doctor.  I have used this instrument since 1965 when I was a second-year medical student.  I remember vividly when Ely Lilly, (big pharma) gave all of us the proverbial black bag filled with goodies like a reflex hammer, and their version of the stethoscope that you see to the left.  I still have it and still use it.  The plastic tubing has gotten stiff, the rubber gasket covering the cardiac side of the bell is cracking here and there, and the plastic diaphragm has gotten jaundiced with age, but it is still  functional.  That stethoscope has seen a lot of action, from the trauma bay at LA County/ USC Medical Center during internship, and through two residencies, one in General Practice and then a five-year General Surgery residency in the late 1970s.  Many surgeons don’t carry a stethoscope, as they rely on other parameters to tell them how the patient is doing.  I, however, find it useful and it gives me that “laying on of hands” and a bit of doctor magic, that for some patients confirms my credentials to them.  Surgeons rely on bowel function to gage the progress of the post-operative patient. With my stethoscope placed on the abdomen, I can frequently predict 24 hours in advance when that blessed gas bubble leaves the body via the rectum.

After over a half century in this profession that stethoscope has been like a friend to me, revealing a subtle crackle at the base of the lungs, heralding the onset of pneumonia, alerting me to a narrow outflow due to scaring of the aortic valve, that announces a significant operative risk and so many more sounds which, in all honesty, the much-touted CT scanner does not reveal.  It is now time to hang it up, put it to rest in a closet never to be used again.  All good things must come to an end.  With its retirement so too comes mine.