It is just now sinking into my brain over a month later.  My family and I survived the largest fire that ever raged in California in historic times.  It started at 6:26 PM on Monday, December 4, 2017 at Thomas Aquinas College, fueled by very dry conditions, and 60 miles per hour Santa Ana winds.  The fire, at one point, traveled at a speed of one football field per second. By that evening it had reached Ventura, and was consuming houses with a voracious appetite.  In eleven days it had reached Santa Barbara where it burned all the chaparral above Montecito.  That allowed a relatively small amount of rain, a month later, to wash away numerous houses with its inhabitants.   On January 12, 2018 it was finally declared 100% contained, after burning 281,893 acres (440 square miles).  It did 10 billion dollars of damage, destroyed 1,063 structures- over 550 in Ventura alone.  It cost $177,000,000 to fight, with 8,500 firefighters at the peak. 104,607 people were evacuated.  Although our family was under evacuation orders, the six of us were ready to leave, but decided to stay, so more accurately it was only 104,601 evacuations. Surprisingly, only two people died as a direct result of the fire.  It was not until the mud slides, caused by the denuded earth, when brief but torrential rains washed away over one hundred homes in Montecito that increased the death toll to at least another twenty-one people. 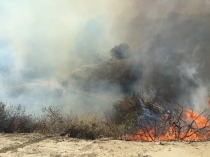 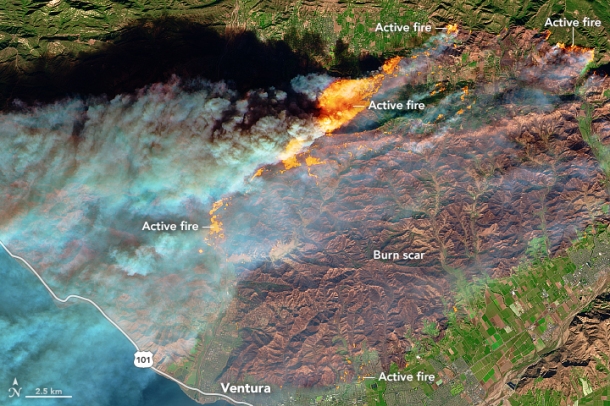 We had our RV packed and were ready to leave.   It is a strangle eerie feeling to walk around the house and try to decide what to take and what not to take.   I was surprised how quickly I chose and what I left for the fire to consume. It inspired in me a new concept of what ultimately matters. When it came to the actual act of doing it, it really was a lot easier to do than I had imagined. The fire department was really not able to assist us for the first 48 hours, as many buildings were at risk in Ventura, and as we were only one house.  Staying allowed us to have the best chance to keep the house.  I had plenty of water.  The ranch has 60,000 gallons stored in tanks.  I have a couple of wells, each with impressive outputs of 800 and 300 gallons per minute.   We also have a swimming pool with another 15,000 gallons.  There were also several escape options, if it came to that.

Ten years ago, I prepared for this, I bought a 75psi water pump that I tried out only once.  I did not empty the gasoline that was in the pump for the last ten years, and figured that the motor would be all gummed up, but very luckily, the first pull of the cord it started right up like brand new.  I have gained a greater respect for Briggs and Stratton now.  I had some fire hose and was able to borrow some more from the City of Santa Paula.  I turned on all the irrigation sprinklers in the lemon orchard surrounding us, and fortunately we survived. Lemon trees, as it turns out, are quite resistant to fire, as compared to Avocado trees, that literally explode as their oil content is much higher. It was not until the big water drops on Wednesday, December 6th, from the helicopters, that I a saw that we would be saved.  My neighbor lost a hundred head of cattle which were just a thousand yards north of us.  The first night my son-in-law and I drove our 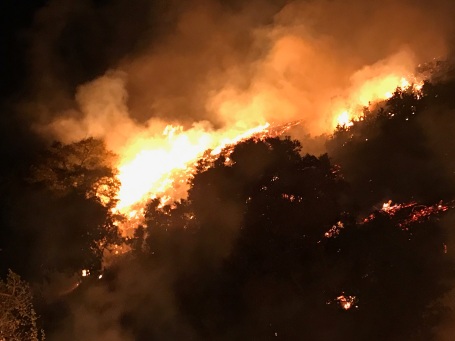 ATV’s up to his ranch and witnessed Armageddon up close and personal.  Walls of flame, 200 feet high, came down the mountain towards us.  The searing heat on our faces was unbearable. There was no way to round up the cattle, they had scattered into one hundred directions. There was no way to stem the tide of this force.

Many of my friends and coworkers lost their homes.  One of them had just retired and he and his wife were traveling, as retired people are apt to do, when the fire struck.  The only thing left standing was his fire place and the flag pole.  A life time of memories gone, but the flag survived through the heroic act of a few firefighters.  He was an avid collector of books and art, all that just went up in smoke, even his metal sculptures melted.

Another friend had saved his house ten years ago when the last fire came through, but not this time.   Yet another co-worker had lost a home in northern California just recently with the fires up there, only to lose another home here with the Thomas fire.  All told, close to 30 families that we know are now homeless.

I can’t help but wonder why my family I and were so lucky to be spared, and others were so unfortunately unlucky to lose everything. If this was an act of God one would have to assume that it is meant to send a message.  But as so many of His prior messages, this one also is difficult to process, understand, and interpret. If God is, He keeps His reasons well hidden, I, nevertheless, would give my eye teeth to know what He was thinking.  Was it meant as a warning to set us back on the straight and narrow path, somewhat akin to the flood?  Was it meant as a punishment for some real or perceived sins we had committed akin to the eviction from Paradise?  But why the cattle? Had they also transgressed His expectations? And what about the children in Montecito, why them?  Why in such a cruel way…drowning in mud?

No one has yet mentioned the obvious, that the fire started at a place dedicated to St. Thomas Aquinas, could there be a clue here?  Thomas is arguably the most influential thinker of Christianity.  He combines Aristotle, Augustine, and even the Islamic philosopher Averroes in his opus magnus, Summa Theologica.  If the Tomas Fire is a message, then it redefines and gives a new meaning to the concept of an all loving, omnipotent, omniscient, Creator of all.

Pictures from space courtesy of Wikimedia

Picture of burning brush by the author

Picture of flag and burning house by Rob Varela

Picture of walls of flames by Michael McCalister