A House Divided -a Pebble in my Shoe

I was 11 years old when I left my homeland, Austria.  My parents had been running away forever it seemed.  Now we were running to a new country, the United States of America.  Nevertheless, I adapted quickly.  In a short time I became an American, lost my accent and my lederhosen.   My father was a Jew from what is now the Ukraine, and my mother was a Catholic from what is now Romania.  But if you asked them what they considered themselves, they would say Austro-Hungarian, for that was the land they were born in and grew up in.  Austro-Hungary was sort of a united states of Europe, which was smashed to pieces by World War I.   In retrospect, that event, embodied by the Versailles Treaty was probably the root cause of Fascism, Communism, and if you believe in cause and effect, the chain of events that has led to what we now face… world terrorism.  The European Union is a half-hearted attempt to regain what was once a great empire.  The kids at my new adopted school called me a “Kraut”, the not so endearing term for a German, although I had not one cruciferous (Kraut) gene in my young body.  My parents saw a lot of hate, racism, nationalism, and poverty.  We came here with nothing.  My father smuggled a few one hundred dollar bills sewn into a leather belt that my mother carefully split and then reunited hiding the illegal contraband.  It was against the law to take any money, in any currency, out of Austria in 1954.  My genes are now approaching three quarters of a century of existence.  Those few hundred dollars were the seed money that catapulted me into my current position.  I consider myself successful.  I am a professor of Surgery, still teaching young doctors the art and science of the scalpel.  I farm a 100-acre gentleman’s ranch and grow lemons, avocados, oranges, and the vessels of my genes, my grandchildren.  Most people like me and I like myself.  But there is a pebble in my shoe when I walk, and I can’t seem to get it out.

That pebble is steadily growing in size and is starting to wear an ulcer into my foot, well actually into my soul, as the pebble is metaphorical and more importantly my soul is as well.  That pebble is the increasing acrimony between the left and the right in this country.  I don’t consider myself either right or left.  At least I would not make a very good Republican or Democrat.  On the fiscal issues, I vote more to the right, as it is more respectful of my hard earned money, while the Democrats want to give my money away.  It is always interesting to me to see a wealthy individual (usually inherited wealth) whose own assets are protected by trusts, and fleets of accountants urge for higher taxes and more even distribution of wealth.  When it comes to their own money, however, they will not part with a single dime.  They can walk past a beggar on the street, with both legs amputated and smelly sores oozing puss, and turn the other cheek, not in the usual sense that term is meant to convey, but looking away from the tin cup the beggar’s arm is tremblingly extending.  When I gave the beggar money, I was chastised and admonished ,“You should not do that, it’s the government’s job to care for these people”, they say.  True story!  Look at George Soros and Warren Buffett, who support left causes and increased taxation of “the rich” while they have their assets cleverly protected by armies of tax attorneys.

On the other hand, I cannot understand the political right’s dogmatic position of the laissez faire on Wall Street, while at the same time fanatically worrying about who sleeps with whom and forcing women to carry babies conceived by incest or rape.   The right also has its own, set in stone, ideas of who God is, how he looks, what he wants of us, and who is going to hell.  The right wing’s God is this older guy who has a full and flowing grey beard and wears a skimpy white night gown.  That is because on old (Italian) guy with a full and flowing grey beard painted this vision of God’s likeness (see picture below).  And I strongly suspect he tried on of few gossamer nighties for size, before he crawled up on the Sistine Chapels rafters to execute one of world’s great art treasures. The right’s vision is for “Creationism” to be taught in schools along with school prayer.  Our founding fathers are turning summersaults in their graves at these emboldened attempts to mix church and state.

Thomas Jefferson was very adamant about the separation of church and state.  John Adams stated that in the best of all possible worlds there would be no religion.  George Washington, in the Treaty of Tripoli, wrote that the United States was not based on the Christian Faith, a document that was unanimously approved by both Houses of Congress of that time. And Abraham Lincoln was as close to being an Atheist as anyone ever was according to his best friend and law partner, and further exemplified by his statement, “The Bible is not my book!”.  William Howard Taft disavowed the divinity of Jesus.  What history books are the Republicans reading?

At the same time the liberals have also forgotten a few lessons from our founding fathers, like freedom of speech for example.  Just recently Berkley students rioted in the streets, destroying property, looting, and burning because they did not want a conservative speaker to give an address on campus. That is exactly what the Nazis did on “Krystal Nacht”.  The ultra-left has become the ultra-right.  I would include the Women’s March on Washington with the knitted pink pussy caps and the “Not my President March”, although not as violent, in the same genre.

When Obama won the election, were there marches on Washington?  After all we just had a national election with an undisputed result accepted by both sides.  The current left feels freedom is only great when their opinion dominates, but not when the opposition does.  It needs to be shouted down, protested, personalized, polarized, ridiculed and finally destroyed.  This is well described in Saul Alinsky’s book Rules for Radicals which can be used as the playbook by the radicals on both the right and the left to great advantage.

Democracy is rule of the people, which is exactly what the word means in Greek.  Demos is the people and Kratia is power.  Power of the people.  When the overwhelming majority of the people feel united in their opinions, then it is easy, as people feel and act in unison. But when the opinions are split evenly or close to evenly it becomes problematic.  One vote can swing the entire direction of the country. You might call it the tyranny of the majority by one.  And the majority by one is not much of a majority.  Then comes the whole issue of the Electoral College.  Our President is actually not elected directly but by the Electoral College, which has caused a whole new slew of problems this last election.

In the formative stages of our Union the small states would not join because they felt, and rightly so, that they would be bowled over by the larger states who had more people and votes.  In order to get their buy-in, the founding fathers gave them more power by assigning a number of votes to each state, not entirely based on just population.  That gave that state more authority than by just looking at the number of voters in that state.  If it were just the number of voters, the east coast and west coast would always elect the president and the middle of the country would have no say-so.  Look at the red and blue states with their assigned Electoral College numbers on a map and you will come to the same conclusion. 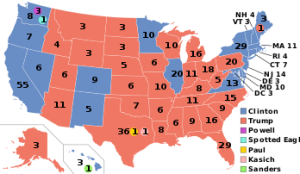 The Achilles heel of democracy is the even split of people on issues.   That is the spark that leads to secession, ultimately the only real answer to a house divided.  As Lincoln put it so well, “A house divided against itself cannot stand.”

The pebble is growing.  If I could, I would just stay on my ranch and grow lemons.  I fear that the hatred will continue to grow just as that pebble in my shoe.  It is not inconceivable that civil unrest will escalate and I will not be able to shut myself away from this unrest.  Paraphrasing Mark Twain, history does not repeat verbatim but it does rhyme.  He who does not heed history is doomed.  If we are not careful we shall lose this great country to anarchy.  And Lincoln is not around anymore to save us, ironically, he too was felled by an anarchist’s bullet.